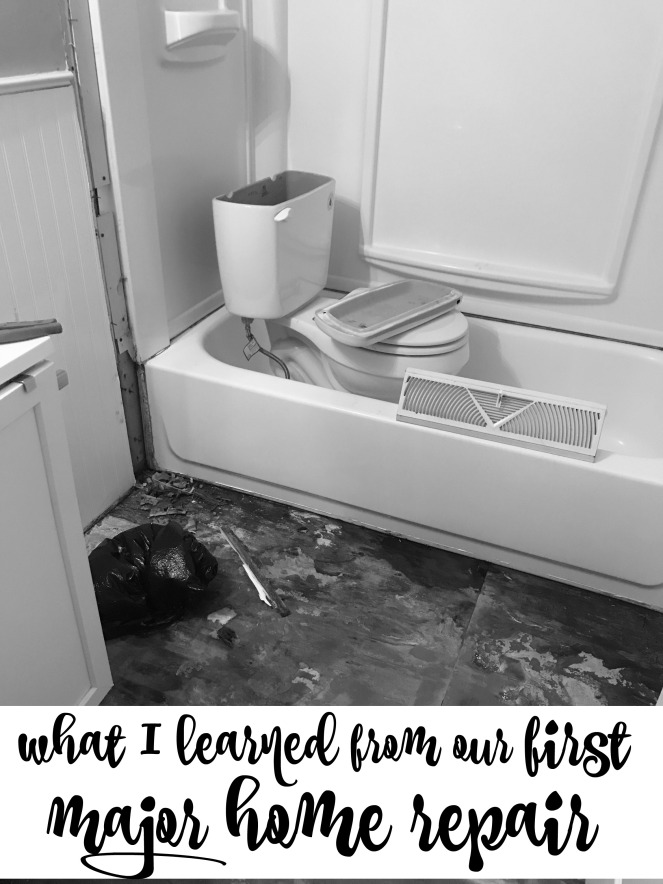 We spent the past three weeks with both of our bathrooms in almost complete disrepair. It made for some creative problem solving (and a few late-night shower runs to my inlaws). This wasn’t a remodel we’d planned to tackle – we discovered some long standing water damage and had to dry out the rooms and replace all the flooring.  Although we were fixing a problem that we hadn’t anticipated, I was able to plan a few days before the bathrooms were demo’ed. This was my first experience with major home repair, so I thought I’d share a few things that made the process a little less difficult.

#1 Contain displaced items in one area

For our bathroom remodel, I had to take everything out of both bathrooms: rugs, shower curtains, cleaning supplies, toiletries, trashcans…you get the idea. The things that we still needed to use every day were divided up into his and hers bins. Paul’s bin contained his toiletries and stayed on the dresser in our bedroom. I moved everything I needed into our guest room and set up a place to get ready in there. Everything else went to one corner of our 4th bedroom (Paul’s man cave/office).

I know that’s three areas – but each category (his, hers, non-essentials) had its own area. I know if I hadn’t done this from the start, those two tiny bathrooms would have taken over the whole house!

I know that might sound odd, but it’s easy to become accustomed to things being out of order. I’m the kind of person who will assemble everything I need for a project and then leave it in a pile in my office for months! I knew I had to deal with the displaced items as soon as our bathroom was functional again.

On Thursday night the contractor finished installing everything, leaving the “small” touch ups and finishing pieces to us. The bathrooms were no longer torn up and were now fully functional. The next day I came home from work and determined to clean up the mess from weeks of construction in those bathrooms and put everything else away. I had to throw away, scrub, put away, hang up, and re-organize things for several hours before my work was done. It was tiring, but I felt so much better getting that pile of non-essentials out of Paul’s man cave!

There’s a vlog coming soon to my YouTube channel that will give you a behind the scenes look at the whole process, and once we’ve completed the remodel I will share pictures and all the details here!

What’s the biggest home repair or renovation you’ve tackled? What did you do to make it easier?