Happy Feline Friday! My kitties are pretty frequent subjects over on Instagram, but they haven’t shown up on the blog in a while so I’m dedicating this 5 on Friday to them!

I adopted these two as two-month-old kittens almost seven years ago. They are both named after female characters on The Andy Griffith Show – Peggy MacMillan is the orange one, and Thelma Lou is the black one.

They spend their days sleeping in various spots around the house and rarely share a spot like this anymore, so I was surprised to find them on the guest room bed at the same time!

Thelma Lou was a Christmas present from Paul back in the days when my sister lived with us. She went with me to pick out my kitten…and we each came home with one. 🙂 Alli couldn’t take Peggy with her when she got married, so they’ve both lived happily ever after with me.

They both have their preferred humans. Thelma Lou has always loved Paul the most – he was not a cat person before we got these two, but she’s turned him into one! It’s a rare day when Thelma Lou will sit on my lap, but she loves to sit with him.

They both follow me around the house, and since we’re all creatures of routine it works out well. Thelma Lou watches me get ready from her spot on the bed every morning and usually ends up in some upside down pose like this one. She is such a funny cat!

Peggy is a major lap cat and loves to snuggle into my arm like this. She definitely prefers me to other people and I’m ok with that. 🙂 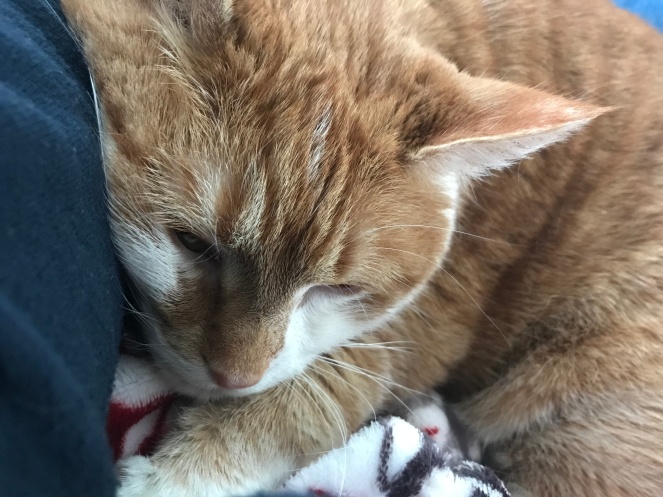 Do your pets have nicknames? We call them by so many names it’s no wonder they rarely come when they’re called. Thelma Lou gets Thellie, Thel, Thelma Lou-zizes, Thellers, Theller-Bellers, Thelziebubs, Panther Kitty and Lucifee (from Cinderella).

Peggy gets Pegs, Peggers, Pegger-Schmeggers, Schmegs and Pookers. I also just refer to them as “the kittens” which is hilarious because they’re BIG kitties.

Blogger friends – join me for High Five For Friday over here and link up your favorite posts from this week!